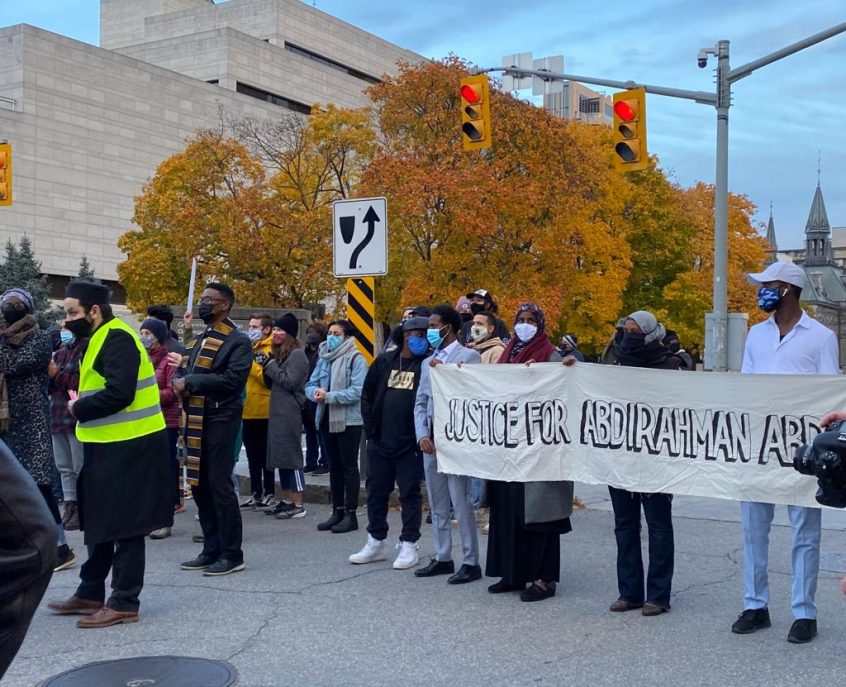 It is a sad day in Ottawa, a sad day in Canada and a sad day for our justice system. It has been a long four years. Abdirahman Abdi’s family, the Justice For Abdirahman Coalition, lawyers, activists and countless community members have worked tirelessly and have been waiting for answers.

Today, the justice system has failed us.

We take comfort knowing that justice will always be served, if not in this world then in the next. Our Lord is the Most Just and each soul will get what it is owed as well as what it deserves. Allah (SWT) says in the Qur’an, “No burdened soul shall bear the burden of another, and every person will be accountable on the Day of Judgment for himself” (13:89; 31:32).

In addition, there’s a saying of the Prophet ﷺ, narrated by Abu Hurairah that the Messenger of Allah (peace and blessings of Allah be upon him) said: “All scores will be settled on the Day of Resurrection; even the hornless sheep will settle its scores with the horned sheep.”

Let us not forget that Abdirahman, Allah yarhamu, was a Black, Canadian Muslim, a community member, a son, a brother, and a husband who left behind a widow and a son who he never got the chance to hold in his hands. Above all, he was a human being and he didn’t deserve the violent treatment he received at the hands of the police. Not even a convicted verdict would have consoled a frail mother who had to bury her son with a battered and bruised body. Our prayers are with Abdirahman Abdi’s mother and the family. May Allah give them patience!

We should turn this tragedy — and indeed it has been a terrible tragedy from the first moment — into motivation to continue on the path of justice and peace, for Abdirahman and every person who is wronged, regardless of who they were wronged by.

The work is not over yet. Despite the fact that Abdirahman’s case has not resulted in a conviction, this is the beginning of paving a way for police to be a part of the broader solution, rather than a part of the problem. We have seen how the deaths of George Floyd, Ahmaud Arbery, Breonna Taylor and Elijah Daniels instated a wave of change in the United States and started an integral conversation on race and justice across North America. It has been a long time coming for a similar reckoning here in Canada.

This is about more than one case. The outcome of Abdirahman’s case highlights the long standing issues and divide between members of our marginalized community and the justice system. This could have been the start of reconciliation between the police and the community. Instead, we are left with the hurt and pain of seeing a vulnerable member of our community receive no justice.

This is a speech I prepared on behalf of UMO-OG that we wanted to share following the verdict of the Abdirahman Abdi Case. Thank you to Aisha Sherazi and Imam Sikander Ziad Hashmi for their input and assistance.