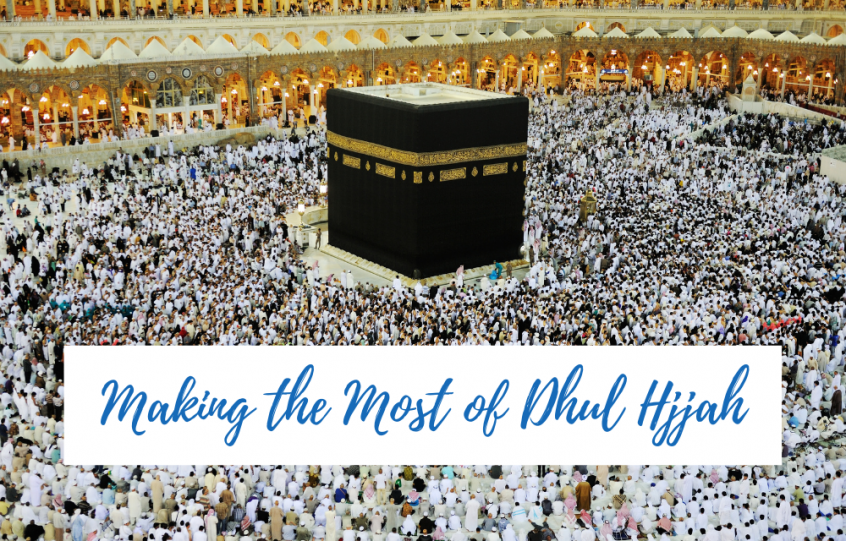 There are no days in the year more beloved to Allah than these days; just like the last ten nights of Ramadan, these ten days are crammed with opportunities to earn reward.

“No good deeds done on other days are superior to those done on these (first ten days of Dhul Hijjah).” Then some companions of the Prophet (SAW) said, “Not even jihad?” He (SAW) replied, “Not even Jihad, except that of a man who does it by putting himself and his property in danger (for Allah’s sake) and does not return with any of those things.”

While this is the season of Hajj, there are many acts of worship Muslims around the world can perform if they are not performing Hajj.

Here are some actions you can take to maximize the rewards in these blessed days:

(1) Fast During These Days

Fasting on the first nine days of Dhul-Hijjah is a practice encouraged for any Muslim not participating in Hajj this year. Fasting is one of the best of deeds.

The first 10 days of Dhul-Hijjah are the most blessed days in the year, making them the perfect opportunity to increase our ibaadah (worship) to Allah.

The Messenger of Allah (SAW) said: “Whoever observes fast for a day in the way of Allah, Allah will remove his face from the Hell to the extent of seventy years’ distance.” (Saheeh Muslim).

A great act of worship to bring yourself closer to Allah (SWT) on ‘Eid ul-Adha is through the sacrificing of a livestock animal. This revives the sunnah of Prophet Ibrahim (AS). He was ready to give up everything for the sake of Allah and submitted unconditionally to Allah’s commands by even offering his beloved son Ismail as a sacrifice.

Eid ul-‘Adha is a unique opportunity for us to follow the sunnah of the Prophet (pbuh) and participate in a form of worship less common to us, sacrificing for the Sake of Allah.

There are two things you need to abstain from until after the sacrifice:

Prophet Muhammad (pbuh) is reported to have said:

“When any one of you intends to sacrifice the animal and enter in the month of Dhul-Hijjah, he should not get his hair cut or nails pared till he has offered his sacrifice.” (Saheeh Muslim)

(3) Increase in Dhikr (remembrance) and Good deeds in General

Our Prophet (pbuh) said: “There are no days that are greater before Allah or in which good deeds are more beloved to Him, than these ten days, so recite a great deal of tahleel, takbeer and tahmeed during them.” (Ahmad)

The takbeer can also be recited as follows:

The Companions were known to say the takbeer regularly. Let us follow in their footsteps and encourage others to recite the takbeer as well as an act of worship and a proclamation of the greatness of Allah.

The day of Arafat is the most important day of Hajj. It is the time when the Hujjaj (those performing hajj) are in a constant state of dua, and if accepted they are granted forgiveness for all of their past sins. For those of us who are not among to hujjaj, there are still opportunities for our forgiveness and for us to maximize this day:

Fasting on the Day of Arafah:

Our beloved Prophet Muhammad (pbuh) said “Fasting on the Day of ‘Arafah absolves the sins for two years: the previous year and the coming year.” (Saheeh Muslim)

The Prophet (pbuh) said: “The best of supplications is the supplication of the Day of Arafah. And the best of what I and the Prophets before me have said is:

‘None has the right to be worshiped but Allah, Alone, without partner, to Him belongs all that exists, and to Him belongs the Praise, and He has power over all things.’” (Tirmidhi)

(5) The Importance of Donating During these Days

The first 10 days of Dhul-Hijjah are not only the most beloved days to Allah – but He loves to be worshiped on them, and for us to put extra effort into doing good deeds during these days.

Ibn Abbas reported that the Prophet (pbuh) said, ‘There are no days in which righteous deeds are more beloved to Allah than in these (ten) days’. [Sunan Ibn Majah]

Simple actions such as helping your family, smiling in front of your fellow Muslim, and taking care of your parents become more valuable during the first ten days of Dhul Hijjah.

Many of us maximize our sadaqah (giving charity) during the last ten nights of Ramadan, but the first ten days of Dhul Hijjah are valuable too! This is an opportunity you want to take full advantage of to earn more reward for a good deed.

The Messenger of Allah (pbuh) said that Allah (SWT) says in a hadith qudsi: ‘Spend (on charity), O son of Adam, and I shall spend on you.’

These 10 blessed days are an amazing time to give to charity because all the rewards you receive from giving sadaqah or paying your Zakat will be multiplied many, many times over.

During this time, the good deeds you do are warmly received by Allah (SWT) and in turn are rewarded greatly. He encourages us to give charity and care for the poor because these are acts that He loves. Giving sadaqah is among the few actions that we are allowed to feel jealousy for, in order to encourage us to give more.

You can donate to Masjid ar-Rahmah by visiting this link.

This website uses cookies to improve your experience while you navigate through the website. Out of these, the cookies that are categorized as necessary are stored on your browser as they are essential for the working of basic functionalities of the website. We also use third-party cookies that help us analyze and understand how you use this website. These cookies will be stored in your browser only with your consent. You also have the option to opt-out of these cookies. But opting out of some of these cookies may affect your browsing experience.
Necessary Always Enabled
Necessary cookies are absolutely essential for the website to function properly. These cookies ensure basic functionalities and security features of the website, anonymously.
Functional
Functional cookies help to perform certain functionalities like sharing the content of the website on social media platforms, collect feedbacks, and other third-party features.
Performance
Performance cookies are used to understand and analyze the key performance indexes of the website which helps in delivering a better user experience for the visitors.
Analytics
Analytical cookies are used to understand how visitors interact with the website. These cookies help provide information on metrics the number of visitors, bounce rate, traffic source, etc.
Advertisement
Advertisement cookies are used to provide visitors with relevant ads and marketing campaigns. These cookies track visitors across websites and collect information to provide customized ads.
Others
Other uncategorized cookies are those that are being analyzed and have not been classified into a category as yet.
SAVE & ACCEPT
Pin
Share
Tweet
WhatsApp
Email